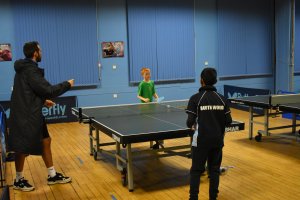 The Leicestershire Schools Table Tennis Association were delighted to have a record 164 entries for the Schools Individual Championships 2022, an increase of 35 compared to the previous year. The Championships were held at Knighton Park Table Tennis Club (KPTTC) and the Leicester Grammar School (LGS) on Saturday December 10th.

The largest entry was for the Under 11s – where 42 boys and 12 girls entered. A busy morning ensued with some good play by promising youngsters from a number of schools- notably St John the Baptist Leicester and St Peters CofE Market Bosworth.

Below are the individual champions that will go on to represent Leicestershire in the Table Tennis England National Schools Individual Championships in April 2023 in Wolverhampton.

Our thanks go to KPTTC and LGS for hosting the tournaments, as well as Active Together, who's grant to the Leicestershire Schools Table Tennis Association support our competitions.

Thank you to all the players for their enthusiasm, skill and co-operation during the day, as well as to parents and supporters, and to those that organised and helped run on the day.