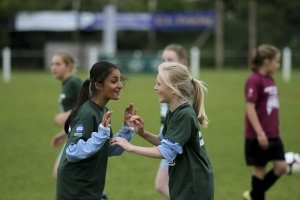 Children and young people's activity levels overall have recovered to pre-pandemic levels, with 47% of children meeting the Chief Medical Officers' guidelines of taking part in an average of 60 minutes or more of sport and physical activity a day.
The figures, which Sport England have published recently, are an encouraging step in the right direction but also a reminder there is much more to do so that as many children as possible feel the benefits of being active.

Sport England's Active Lives Children and Young People survey, which covers the 2021-22 academic year, shows that overall activity levels are up 2.6%, meaning there are 219,000 more active children compared to the previous academic year.

Activity levels are now back in line with the 2018-2019 academic year, the last full year before the pandemic.

While there are rises in both the numbers getting active outside school hours and during school hours, the in-school rise of 2.2% or just under 190,000 more children and young people taking part in an average of 30 minutes or more sport and physical activity a day, shows how hard schools worked to get sport and activity back in a safe and positive way after Covid-19.

Boys, whose activity levels were most impacted during the pandemic, have largely driven the recovery (50% of boys are now doing an average of 60 minutes a day compared to 45% of girls).

There are also some stats today which look at the types of activity that are growing for girls. For example, 100,000 more girls are playing football regularly compared to when we started the survey in 2017, and this is even before the massive visibility boost for the game during this year's UEFA European Women's Football Championship.