Rain Fails to Dampen the Spirit of the School Games!

The 2013/14 Leicester-Shire & Rutland School Games came to a successful, albeit wet, climax at Uppingham School Sports Centre as hundreds of competitors went for gold at the Summer Championships on Friday 27th June.

Despite the erratic weather that ensued (rain and thunder storms!), nothing could dampen the passion and spirit of the 1,100+ talented young athletes and disabled athletes from across Leicestershire, Leicester and Rutland.

Over 140 teams took part in an action-packed day of competitive school sport and celebration, battling it out for the title of 'School Games Champions' and 'Spirit of the Games Champions', and attempting to position their Partnership as high up the medals table as possible by the end of the day.

Primary aged athletes (5-11 years), representing over 90 different schools, endeavoured to battle through the rain by competing in 16 competitions, across 10 sports, in the showcase finale school sport event of 2013/14, which was also part of National School Sport Week.

Sporting Champion, and world-renowned streetball and basketball player Tom Connors, and Ash Randell, multiple world record football freestyler, both from SBX Entertainment wowed the crowds with a fantastic display of tricks and skills. The Ceremony also involved a dance performance from 'Essensual Rejuvenation' the winners of the 'Leicester-Shire & Rutland's GOT Talent' Competition.

The athletes then set off for 4 hours of competitive school sport; competing in their different Partnership coloured t-shirts, all vying to the finish in the gold medal position. All teams set out to give it their all whilst competing to the School Games Values of; Determination, Honesty, Passion, Respect, Self-Belief and Teamwork.

Over 100 young leaders from local schools across Leicestershire, Leicester and Rutland supported the running of the competitions, after receiving specific training prior to the Championships.

Due to the weather, individual Award ceremonies were held at each venue with the gold medallists received an impressive victory torch trophy alongside gold medals and the 'Spirit of the Games' winners also received a trophy. Silver and Bronze medals also went to 2nd and 3rd place in each competition.

Excellent displays at the Summer Championships helped Hinckley & Bosworth and Rutland claim their Champion titles! With North Charnwood leading the Medals Table coming into the Summer Championships, Hinckley & Bosworth claimed 2 Gold, 3 Silver and 2 Bronze to take the overall Champions title with 369 points! Rutland claimed a massive 6 'Spirit of the Games' Trophies at the Championships to romp to victory winning the most trophies over the year (10), with their displays of Determination, Honesty, Passion, Respect, Self-Belief & Teamwork.

The young athletes represented our 10 School Sport & Physical Activity Networks (SSPANs), all of which will have qualified from Level 2 area finals, to participate in this Level 3 County Final Championships.

Geoff Maltby, Sports Development Manager from Leicester-Shire & Rutland Sport (LRS) said: "This year's School Games Summer Championships saw a record number of schools and young people competing, continuing to successfully build on our award winning programme which is now in its third year and as good as ever! In spite of the great British weather threatening to dampen this year's event, it was another huge success, seeing our most talented young athletes compete against their peers to become county champions and our talented young leaders managing and running competitions in a variety of leadership roles." 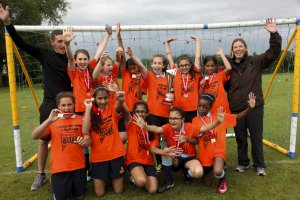